Over 5.5 million people have no access to safe drinking water.

In the recent flood-affected areas, safe drinking water is now a priority due to the destruction of many village water pumps and water wells.

Ehsaas donors have provided local communities with 6,800 Water Pumps and Wells to date providing water to over 110,000 people.

There is an urgent requirement to provide more new water pumps and water wells as soon as possible and, to repair many of the water pumps and water wells that have already been provided by our donors. If you have installed a water facility with Ehsaas, please contact us for an update and if any repairs are required – which you may want to help with.

Ehsaas is on the ground in Balochistan and Sindh and is evaluating its water pumps and water wells and where new ones are required, and is still helping as many families as possible with Emergency Flood Aid.

Provide clean water to the poor

The village of Kharo Bajeer in Sindh has a population of 3,000 people and is in a desert area with one of the lowest Human Development Index ratings in Pakistan.

The people of the village had to travel a great distance to fetch ‘salty dirty’ harmful waterborne diseased water from dangerous wells with a depth of more than 150 feet in rugged valleys, adding a great deal of fear and misery to their daily lives.

After an in-depth analysis, feasibility and benefit study, Ehsaas installed a ‘Reverse Osmosis (RO)’* water treatment plant, with a capacity of 10,000 gallons of clean drinking water per day.

This has given the people of Kharo Bajeer Village safe, clean drinking water, avoiding many common diseases previously in the village including bacterial diarrhea, hepatitis A and E and typhoid fever.

The Kharo Bajeer Water Treatment Plant has changed the lives of people drastically, especially for children and women: child mortality rates have dropped; children now spend more time in primary education and extracurricular activities; families are able to concentrate more on providing a better life for their children and for the elderly.

We would like to thank the 243 donors who made the Kharo Bajeer Water Treatment Plant possible.

Previously, we have also installed a Water Treatment Plant in Umer Kot with a capacity of 50,000 gallons of clean drinking water per day! Helping those people who were greatly affected by the floods.

Why not help provide a life-changing donation… 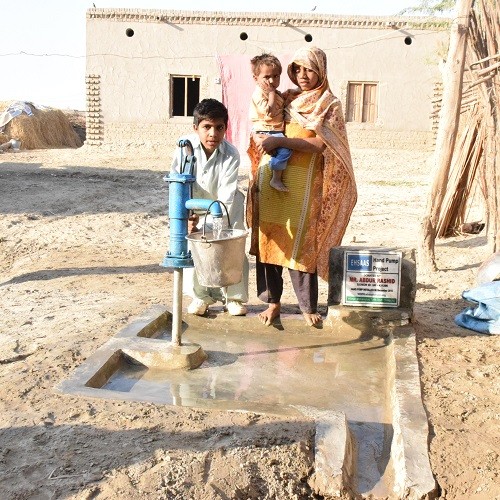 “I used to walk about 6 miles a day to get and then carry the water all the way back for my family, it is a real blessing for all of us from people we don’t even know.”
Shabana Buriro